Some of my poetry has been published over the years in small press publications. Examples of the sort of stuff I write can be found under my name in  www.hellopoetry.com

This is a collection of poems written over a number of decades, and
includes a number of styles reflecting my mood and my age at the time they were
written. 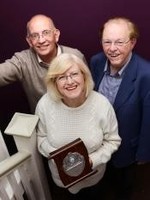 Me, Jenni (Winner) and David

I won second prize in the Slough Writers Poetry Anthology Competition of 2013 with Learning Curves. Here are a couple of poems from the
collection.

An image of younger years:

Where the only clearest crime

For my mother was to the shirt

She had made me wear that day.

The maternal smack did not hurt

So much as the awful way

My ignorance left me in tears.

I live in a neighbourhood and wear it darkly,

tightly over my ears to quiet the arguments,

pulled low to keep me to myself.

I sleep in my neighbourhood for safety

behind four sealed walls of solitude,

a comfort from coldness.

My neighbourhood is made from many fabrics:

real or imagined, most from overseas,

and all I can afford.

One day I shall discard my neighbourhood,

and don my adulthood, which has a peak

[18th May 2020]  The virus lockdown is limiting any thatre activity but I am posting much more on my blog (see Start Page for details).

[23rd January 2019] Have had two plays accepted for production in this year's INK Festival in April.

[17th December 2018] My story Body of Evidence has been riding high on the website www.short-story.me for the past week.

[20th December 2017] Two of my one act plays shortlisted for the INK Festival 2018: The Bogeyman and Lost in Translation.

I will be reading poems at the Suffolk Poetry Festival on 27th May 2017.

being performed tonight as part of Slough Writers Drama Showcase.

[12th October 2015] Slough Writers' play night Six of One at Burnham Library Festival included my play Holding Up a Mirror.

[23rd June 2015] My five minute monologue has been selected to be performed at Leicester Square Theatre in August as part of The Director's Club Showcase.

[24th April 2015] Slough Writers production of Plays in Practice at Burnham Library included an extract from my play Book Club.

[1st December 2014] I managed to complete this year's NaNoWriMo challenge, producing 50,000 words of a novel during the month of November. Now beginning the proofing and editing of The Title Holders' New Challenge.

[23rd March 2014]  My play - Imperfect Speakers - was performed by the Cowra M&D group, NSW Australia, as part of the Cowra 50th anniversary of Festival of International Understanding.