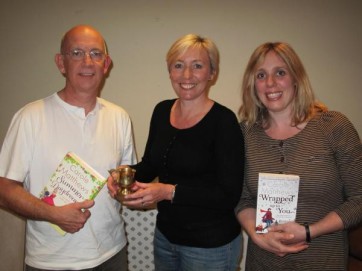 Me receiving the trophy from Carole Matthews for winning the Slough Writers short story competition.

Far from the Malling
Crowd

“It was definitely here last time.”

She was not impressed, and had not exactly been filled with enthusiasm when Mark first suggested a weekend in the Welsh borders. The last time she had visited Wales was at the age of seven with her parents and older brother. They had travelled all the way from Kent in a caravan to a place that she could not pronounce and which appeared to be miles from the nearest town. It had also poured with rain incessantly and the family had resorted to playing endless games of Monopoly, which she had loathed ever since. On occasions she still had nightmares in which she was arrested in a hotel in Mayfair for destroying a community chest and thrown into jail.

Mark squinted at the Ordnance Survey map, neatly folded in a plastic see-through case hung around his neck. He had looked so much different in the open necked shirt and designer jeans when they had met at the New Year’s Eve party at Casey’s Bar in East Malling, thought Melanie. And he had spoken knowledgably about so many things; not like the usual blokes in Romford. But here, in the middle of nowhere, with his North Face anorak, walking boots and rucksack he seemed...well...a bit of a nerd.

“We must be lost,” said Melanie and flopped down despondently on a hummock of grass.

“Don’t say that, chicken. Just need to get my bearings.”

Why did he have to call her ‘chicken’ all the time? He said it was because he could not decide whether he liked her legs or breasts best, but, as he was pissed at the time, she felt it was a fair excuse for lapsing into Maidstone-speak, and she was actually quite flattered.

She remembered Mark telling her about a book by someone called Kafka where a bloke wakes up to find he’s changed into a beetle. This was much worse – Mark had turned into a rambler. My God, she thought, he might even be a card-carrying member of the Ramblers’ Association. The girls back at Temps ‘R’ Us would be gagging to know what their weekend in the country had been like. What could she tell them? ‘Great. We saw twenty different migrant birds and goshawks.’ At least she thinks that what Mark called them. She had not really been paying much attention. He might just have been surprised at seeing some hawks.

It all looked so different on the covers of Walking Magazine and The Hiker. Fresh faced people striding across lush meadows with a backdrop of blue sky and sunshine. They also looked as if they knew where they were.

Mark continued to peer at the map and then survey the skyline which Melanie noticed was growing ominously blacker by the minute. They should have been in sight of the village which was their destination and where Mark had booked them into a romantic little hotel with soft beds, crisp, clean sheets, hot showers, a dinner... In fact everything she was missing since they had set out four hours previously.

“If the worst comes to the worst, we can always go back the way we came.”

“Mark, that was hours ago! It’ll be dark before we get back. Show me where you think we are.”

Mark held the map in front of her. “We definitely crossed this river here about an hour ago,” he said, pointing at a thin blue squiggle on the map.

“It seemed wider when we crossed it,” said Melanie. She pointed at a small symbol. “What’s that?”

“Well that should be easy enough to spot from the top of this hill.”

“Maybe. It could have been demolished now. This map is ten years old.”

“What? What’s the point of using an old map?”

“Well, rivers and mountains don’t change in that time.”

“Yours seems to be missing though, doesn’t it?”

“I think we might have followed the sign for Llanbrioddyginn Farm instead of Llanboddygil Estate. Llandarach village is the other side of that.”

Melanie objected to the use of ‘we’, when they were lost. Mark was the one with the map, the bloody old map. She jumped to her feet, determined she was not going to be caught in a downpour. There was a small wood at the top of the hill which might at least provide a little bit of shelter.

“Come on,” she said. “We might be able to see your missing mountain from up there.”

They hauled themselves up the steep slope. There was no footpath or even a trail; another ominous sign that nobody, not even ramblers, whom she was convinced were all bonkers anyway, had ever trod the route. The only living thing they had
encountered since setting out had been a sheep. One single, solitary sheep, which was also probably lost.

“Ooh, I can’t wait to get to the hotel,” Melanie said, a vision of a hot bubbly bath and a large glass of wine coming into her head.

Mark stumbled over his words as he said, “It’s actually more of a guest house, although they describe themselves as the Mountain View Hotel.  I just don’t want you to expect something like a Holiday Inn.”

“As long as we get a view of your mountain and get where we’re going, I don’t care. When was the last time you were here?”

“Ten years ago with the scouts.”

“Ten years! Oh, that accounts for the age of the map.”

Scouts! Good grief, thought Melanie. How had this never come up in the months they had been together? Probably because pillow talk does not naturally lead to those sorts of images. This would account for his all embracing knowledge about nature, knots and wildlife. Melanie had just imagined he was very well read. When
people say that you find out much more about a person when you go away together, they are not kidding.

A sudden crash of thunder announced the arrival of the rain just as they reached the top of the hill. Shelter was available in the form of a dilapidated building tucked amongst the trees. Whatever it had been in the past, it presented nothing now but a leaky, cold, stone enclosure, but at least it had a roof.

“A shepherd’s hut,” declared Mark. “These are dotted all over the place. Hundreds of years ago these provided shelter for shepherds to stay in overnight, because there were no means of getting back and forth from their farms.”

Melanie was bored out of her skull. “Well, I for one don’t intend spending the night here.

"Look, Mark,” she said finally, “this is our weekend away. I’m cold, tired, and
hungry and worried that it might be dark before we find this hotel...or guest house. This is not very romantic. A few comforting words might be nice.”

Suddenly the heaven’s opened and torrents of water fell from the sky. The canopy of trees above the hut swayed in the gusty wind that had swept the downpour across the hill and meadows beyond. It was over almost as soon as it had struck, leaving everything completely drenched. The filthy black cloud receded and the sky
brightened once more. As Mark and Melanie looked towards the brightening skyline, Mark pointed and said: “I think that’s our missing mountain. Clever of  you to suggest getting to the top of this hill,” and he gave her a long kiss.

“Right,” said Mark, and jabbed at the map again. “This is where we are now, and that is our mountain, so if we go down and across the fields in that direction we’ll find the road that’s marked yellow here. That will take us towards the Llanboddygil
Estate.”

Melanie was only half-listening to what Mark was saying. She could not remember the last time anyone had told her she was clever; and she had forgotten how good a kisser he was too.

“A road? How long before I get to have a hot bath then?” she said.

“Hmmm, I reckon another five or six miles. Could be a couple of hours...”

“Well, it’s a road, and we might be able to hitch a lift. Although there probably won’t be many cars.”

“I don’t care if it’s a tractor or a muck spreader, just as long as it’s got wheels and going where we want to be.”

Although wrapped in wet weather gear and wearing stout walking boots, Melanie could feel the chilly, damp air creeping into her bones. Having the solid ground of the road under foot gave her spirits a boost. At least roads lead somewhere and provide the possibility of meeting other humans other than shepherds. Tiredness
had overcome both of them and neither spoke, and apart from the crunch of boots
on the rough road surface all was silent. The distant sound of a car engine was
therefore all the more apparent. They stopped and looked at each other.

“Yes, but coming from up ahead, it’ll be going in the wrong direction for us.”

“Don’t be so negative. We’ll ask to be taken wherever they’re going and get a cab back. Just as long as I don’t have to walk any further.”

As the vehicle came into view, they waved their arms. The car slowed down and stopped and a man’s weathered face beamed at them.
“Needing a lift, are we?”

“Yes, “said Mark, “we want to get to the The Mountain View Hotel in Llandarach.”

“Ha,” said the face, “I thought I might find you here. We often have guests who go missing, so I comes out in search. You must be Mark Finch. Climb in and put your gear in the back.”

As Melanie settled into the warmth of the car she said, “This is so good of you. I can’t wait to get cleaned up, have a hot drink and just collapse in front of a TV.
I’m missing Coronation Street.”

“Food and water we can provide, but I’m afraid the storm we just had took out the electricity so there’s no TV. Because we’re so remote, it happens a lot of the
time. Don’t worry though we have a collection of pastimes and games for guests.
You two can join me and the wife after dinner in a game of Monopoly!”

[18th May 2020]  The virus lockdown is limiting any thatre activity but I am posting much more on my blog (see Start Page for details).

[23rd January 2019] Have had two plays accepted for production in this year's INK Festival in April.

[17th December 2018] My story Body of Evidence has been riding high on the website www.short-story.me for the past week.

[20th December 2017] Two of my one act plays shortlisted for the INK Festival 2018: The Bogeyman and Lost in Translation.

I will be reading poems at the Suffolk Poetry Festival on 27th May 2017.

being performed tonight as part of Slough Writers Drama Showcase.

[12th October 2015] Slough Writers' play night Six of One at Burnham Library Festival included my play Holding Up a Mirror.

[23rd June 2015] My five minute monologue has been selected to be performed at Leicester Square Theatre in August as part of The Director's Club Showcase.

[24th April 2015] Slough Writers production of Plays in Practice at Burnham Library included an extract from my play Book Club.

[1st December 2014] I managed to complete this year's NaNoWriMo challenge, producing 50,000 words of a novel during the month of November. Now beginning the proofing and editing of The Title Holders' New Challenge.

[23rd March 2014]  My play - Imperfect Speakers - was performed by the Cowra M&D group, NSW Australia, as part of the Cowra 50th anniversary of Festival of International Understanding.